Joe Biden has accused Russia of aiming to end Ukraine’s right to exist as a nation, telling the United Nations General Assembly (UNGA) that Washington wants the conflict to end on “just terms”.

In his second address to the UNGA as president of the United States, Biden on Wednesday stressed that Russia violated the UN Charter when it invaded its neighbour earlier this year.

He also touched on a variety of international issues, including the global need to combat climate change and food insecurity.

Here’s a look at five key takeaways from Biden’s speech:

Says Russia seeks to ‘extinguish’ Ukraine’s right to exist
Biden kicked off his remarks by condemning the Russian invasion of Ukraine as an unjustified act of aggression.

“The United States wants this war to end on just terms, on terms we’re all signed up for – that you cannot seize a nation’s territory by force,” he said.

Biden’s remarks came just hours after Putin announced a partial military mobilisation on Wednesday, calling up as many as 300,000 army reservists to serve in Ukraine.

Russia’s offensive has experienced major setbacks in recent weeks, with Ukrainian forces – backed by US weaponry – recapturing large swaths of territories in a rapid advance in the east of the country.

He said the number of countries who sit on the 15-member body should be increased. Currently, the UNSC has five permanent members – China, France, Russia, the United Kingdom and the US – and 10 rotating states elected to two-year terms.

“We have long supported permanent seats for countries in Africa, Latin America and the Caribbean,” Biden told the General Assembly.

Permanent members of the council have veto power that limits the council’s ability to pass resolutions against them or their allies.

Although Washington has deployed its veto power on the Security Council dozens of times to shield Israel, a top US ally, from criticism over violations of international law, Biden said on Wednesday that vetoes should be used sparingly.

“Members of the UN Security Council, including the United States, should consistently uphold and defend the UN Charter and refrain from the use of the veto except in rare, extraordinary situations to ensure that the council remains credible and effective,” Biden said.

Says US not seeking cold war with China

Since taking office in early 2021, Biden has continued his predecessor Donald Trump’s approach of prioritising competition with China in US foreign policy. But on Wednesday, the US president said Washington wants to avoid confrontation with Beijing.

“Let me be direct about the competition between the United States and China as we manage shifting geopolitical trends: The United States will conduct itself as a reasonable leader,” Biden said.

Biden has drawn Beijing’s fury for saying on various occasions that Washington would militarily defend Taiwan – a self-ruled island that Beijing claims as its own –  if China were to invade.

On Wednesday, Biden said the US opposes “unilateral changes in the status quo by either side”.

“The United States is committed to Israel’s security – full stop,” Biden said. “And a negotiated, two-state solution remains in our view the best way to ensure Israel’s security and prosperity for the future and give the Palestinians a state to which they are entitled.”

Throughout his White House tenure, Biden has refused to criticise Israeli abuses against Palestinians, including the expansion of settlements in the occupied West Bank and East Jerusalem – territories that would be home to a future Palestinian state.

Moreover, the US president has kept Israel’s US embassy in Jerusalem – a contentious move by Trump that drew Palestinian and international outrage – while failing to deliver on his campaign promise to reopen a consulate for Palestinians in the holy city.

Verbally backing the two-state solution has been the policy of successive US administrations.

But many Palestinian rights advocates have said such a resolution to the conflict has become impossible due to the prevalence of Israel settlements in occupied territory. They argue that talk of a two-state solution allows Israel to maintain the status quo.

On Wednesday, Biden said both sides deserve to “enjoy an equal measure of freedom and dignity”.

The US provides $3.8bn in annual military aid to Israel, which has been accused of imposing a system of apartheid against Palestinians.

Says US will not allow Iran to acquire a nuclear weapon

Amid stalled negotiations to revive the 2015 Iran nuclear agreement, Biden pledged on Wednesday that Washington will not let Iran obtain a nuclear weapon.

Numerous rounds of indirect talks so far have failed to revive the deal, formally known as the Joint Comprehensive Plan of Action (JCPOA), which saw Iran scale back its nuclear programme in exchange for international sanction relief.

Trump nixed the JCPOA in 2018 and unleashed a “maximum pressure” campaign of sanctions against Iran’s economy. In response, Tehran has been escalating its nuclear programme, but Iranian officials deny seeking nuclear weapons.

On Wednesday, Biden also paid a nod to continuing anti-government protests in Iran that were sparked by the death of a woman in police custody. “Today, we stand with the brave citizens and the brave women of Iran who right now are demonstrating to secure their basic rights,” he said. 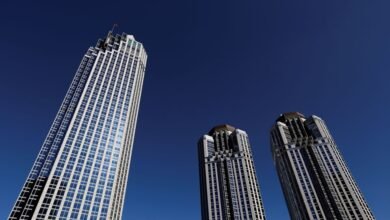