The Economic and Financial Crimes Commission (EFCC) has given the reason for the arrest of former Director General of the Labour Party Presidential Campaign Council, Doyin Okupe.

WesternPost had earlier reported that Okupe was arrested by men of the Department of State Services (DSS) at the Murtala Muhammed International Airport, Lagos while trying to board a flight to the United Kingdom and handed over to the EFCC.

The former presidential aide who was recently convicted on money laundering charges was however released by the EFCC.

Reacting on the arrest, Head, Media & Publicity, Wilson Uwujaren, said Okupe was arrested by the DSS because he had been placed on the EFCC watchlist for over six years.

He however said the commission was already in the process of removing his name from the watchlist.

“The Department of State Services, DSS, today, January 12, informed the Commission of the interception of Dr. Doyin Okupe, former presidential adviser, at the Murtala Mohammed International Airport in Lagos.

“The Service acted on a Watch-list request issued on July 18, 2016, over six years before his recent conviction on money laundering charges by the Federal High Court, Abuja.

“The Commission was in the process of formally lifting the watch-list before his interception and will expedite action in this regard,” the statement read. 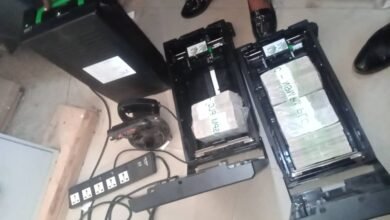